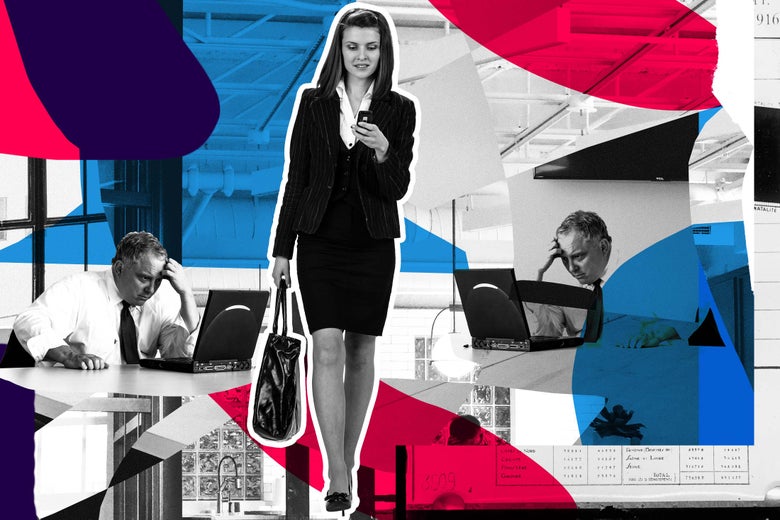 Few people are as knee-deep in our work-related anxieties and sticky office politics as Alison Green, who has been fielding workplace questions for a decade now on her website Ask a Manager. In Direct Report, she spotlights themes from her inbox that help explain the modern workplace and how we could be navigating it better.

I hear a lot of stories about terrible job interviews—the interviewer who demanded to look inside a candidate’s purse, interviewers who are rude and hostile or even explicitly insulting, candidates who are left waiting for hours after taking time off work, and much more. One common denominator in these stories is that when job candidates are subjected to rude behavior from employers, they mostly feel obligated to stick it out until the end of the interview. They don’t get up and leave. They sit politely, then walk out quietly stewing.

Here’s one person’s account of feeling trapped in a bad interview:

I flew to another state for a job interview with the VP of HR for an automotive parts maker. The only flight I could get was for mid-morning, and the VP couldn’t meet me till after 6 pm at a restaurant. So I flew to Detroit, rented a car, and poked around in a small town for hours (turned out to be her hometown—not where the facility was located), and met her at the restaurant as instructed. She arrived with a rep from the executive recruiting firm, and they largely ignored me and smirked together as I put forth my earnest answers to the few questions she asked and sat patiently listening while she spent the majority of the time telling me about what a big shot she was. It was so bad that at one point I felt tearful and had to hide it. I felt trapped and couldn’t think how to end it gracefully and just waited for her to bring it to an end.

Sometimes the problem isn’t an unpleasant interviewer but rather an interview the candidate never would have agreed to if the circumstances had been disclosed ahead of time:

The job was not entry level—it was a directorship position for which I met all qualifications listed in the job description. When I showed up at the interview, it turned out that they had the other candidate in the same interview! The panel read each question and we were instructed to answer as we see fit, but we were also told we could not agree with each other (i.e., if the other candidate said something that matched how I would have answered the question, I had to stumble and come up with something else on the spot, and vice versa). I found that we were both rushing to try to answer first to avoid our individual ideas being “taken”!

Think that’s bad? This person tried to leave but couldn’t:

So I take the day off work to go to this interview. I show up early, and the receptionist gives me a paper to fill out. Then, despite being led to believe that I was interviewing with my future boss, I’m informed that they’ve gotten so many applications that they’re going to do a “group” interview and then whittle it down from there. I’m thinking that there will be 10 people in there, max, and am not really worried.

Well, when I got to the other room, there are 45 people in there and there was a “team” of employees with a detailed speech and PowerPoint ready to go. I realized then that they’d had this all prepared before, and never had any intention of having a normal interview. I’m thinking I want to leave, but since they took my ID to make a copy of it (this was before I saw the group of people), they said I would have to wait until after the presentation because the receptionist had gone to lunch and left the IDs locked in her office. Yeah.

Why don’t more people walk out of bad interviews? These are just business meetings, after all; no one has been ordered to appear by subpoena. The explanation almost certainly has to do with the power dynamics inherent in most interviews, where candidates often feel they must endure whatever treatment the interviewer doles out, no matter how rude. Some of that is understandable: The interviewer has something the candidate wants (a paying job), and that’s a strong incentive to be accommodating, at least up to a point.

But interviews should be two-way streets. While employers are assessing candidates, those candidates should be assessing the employers right back, forming their own judgments about whether they’d want to work for this particular company and this particular manager. And just as an employer might choose to cut short an interview if a candidate clearly isn’t right for the job, candidates should feel free to do the same on their side.

Of course, not everyone has the luxury of doing that. Sometimes you just need a job, and your finances or professional context might make you more willing to put up with an awful manager—or at least to want to see the terms of a job offer before you decide for sure. But even candidates with in-demand skills and plenty of options are reluctant to abort terrible interviews. They worry that it’s rude or that it’s not their place, or it doesn’t even occur to them that cutting short the interview is an option.

But when an interviewer is abusive or otherwise makes it clear they’re not someone you’d ever willingly work for, you’re allowed to leave! You should be polite about it, of course (because you should be polite in all business dealings), so this isn’t about saying something cutting and then flipping the bird on your way out. But you can say: “As we’re talking, I’m realizing that this isn’t the right fit for me. I won’t take up more of your time, and I wish you luck in filling the position.” That’s hopefully similar to how you’d handle such a situation with other types of business prospects—a prospective vendor who was being rude, for example—and there’s no reason you can’t do the same with a job interview. And sure, the power dynamics are different in interviews, but they’re not so different that you need to cede all control over your own time and treatment.

Leverage is a business term describing the ability to influence a system or environment in a way that multiples the outcome of one's efforts. You can use leverage to gain a strategic or tactical advantage in your job search. CXC Talent Solutions is your leverage to build a long-lasting and rewarding career. Our management team and advisory board have over 100 years of experience networking and building businesses in the Apartment, Technology, and Staffing Industries. We have spent a lifetime building a network of contacts and you can utilize that leverage to advance your career to the next level and beyond. If you are looking for your next career step in the industry or if you are considering a career move to the apartment industry, then you can use the leverage CXC as a tactical advantage.

Excellent place to work with.

The time I had with cxc was great. I had no regrets at all. I loved the agents who called and made sure I was happy and well fit for that position I was appointed too. I was most greatful for the pleasure working at every property I was assigned to. I just wish they never left Houston. Cxc was on point with making there employees happy Everytime.

I good temporary service. They will help you find permanent employment with a company that meets your skill level. They are good about checking in with you to see how your assignment is going.

Your typical work day you come in check your property, check your mail if it’s the first of the month for rent, run reports, post payments, run credit and background check you will have to learn new programs if your familiar with them. There is a lot of diversity in this filed as well as personalities they may be the hardest part of the job but the most rewarding is being able to help a family that may have had the hardest time find a decent place to live.